In continuation of last weeks post about women in comics, I am featuring two other talented and inspirational females you have to check out! They both share very influential messages through their storytelling.

I had the pleasure of speaking with writer/educator Jewels Smith. Jewels is part of a collabo with illustrator Ronald Nelson and colorist/letterer Mike Hampton, and is the writer of the comic book Hafrocentric. The characters in Hafrocentric face issues such as gender equality, sexual identity, gentrification, racism, and feminism.

Aside from writing comics, Jewels is an educator in community colleges. She decided that she could “reach more of her students through an unorthodox medium, a comic book. Hafrocentric was created as a way to challenge students and readers alike about the presumptions around race, class, gender and sexuality through character dialogue.” That’s a great way to get students involved!

You can see a preview of the comic here!

I attended a very inspirational and fun interactive workshop held by daily web comic artist Savannah Zambrano. Her inspiration stems from books, music, and cartoons. At a young age she started reading newspaper comic strips, in high school she found manga and web comics, and decided to pursue comics in college, where she was a Sequential Arts major. To prevent herself from becoming lazy, she decided that a daily web comic would be the right path to keep improving. Her goal was to continually inspire herself to create something every day and to hopefully inspire others.

That was the “birth of Unlazy!” 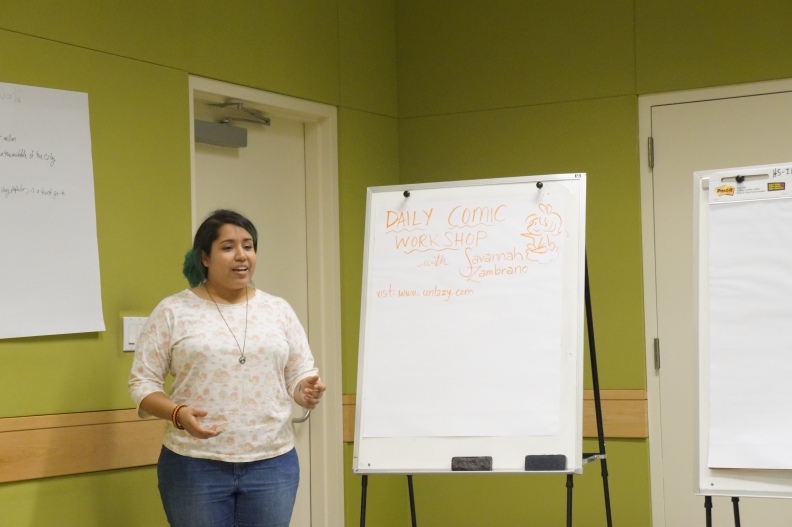 You can check out her daily web comic here!

– Do you have any advice for new upcoming artists? Or experiences that you wish you had received advice for?

Savannah: Draw every day. Be smart and don’t give up. Sometimes you need to work somewhere you don’t like for a bit to pay bills. Don’t let it eat at you and keep drawing. No one likes to talk about the struggle. People only like to see or hear about the success. You will fail and you will have a hard time. Just keep going. Not everyone gets that dream art gig right outta school. It doesn’t make you any less hard working or talented. Read books. Go to the movies. Live your life. It’ll show up in your work and you’ll be growing as an artist. Be unlazy. haha!

-What is your dream project?

Savannah: I don’t know. After my boyfriend died in October I kind of lost track of all those things. What matters? What’s worth it? Who cares? So many things to deal with. I’m still moving forward and hope to find my dream project but as of right now, just staying active and creating is the dream. I’m doing it, so that’s good, ya know? Maybe a story about him and his life. Something that could help people that were in his position. Something to help people in my position. I don’t know. Not exactly a bright answer but not all dreams are happy.

-What superpower would you have and why?

Savannah: Shape shifting because then I could be something else for a while. If I miss someone I can turn into a bird and fly to them. If I want to get away I can turn into a shark and swim away. It would be cool.

For more Women in comics events be sure to check out what WinC has in store!