DC Collectibles is back with a thrilling, new array of action figures, statues and props that were announced at this year’s Toy Fair 2019. See all of the exciting new products and announcements here!

I had a blast covering this years Toy Fair! I am obsessed with everything coming out of DC Collectibles right now! Here are some highlights from The Dark Nights Metal line, DC Batman Black and White series, DC Artist Alley, DC Prime and the DC Designer series.

Straight from the pages of the bestselling DARK NIGHTS: METAL comics series comes an all-new line of 7” statues from DC Collectibles. These awesomely dark Batman statues honor Greg Capullo’s art from the comic book in stunning detail and are perfect additions to any Metal fan’s collection.

Launching in May, 2019, the line will recreate eight characters from the series in total, including the fearsome Batman Who Laughs as a deluxe statue. You can also look for a Batman with baby Darkseid statue, as well as the six other Dark Multiverse Batmen: The Red Death, The Drowned, The Dawnbreaker, The Murder Machine, The Merciless and The Devastator. -DC

Based on the art of Greg Capullo

Based on the art of Greg Capullo 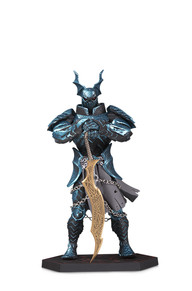 Superhero and wrestling fans—“¡A la lucha!” The wrestling collectible event of the year is here! From the team at DC Collectibles comes a joyful and imaginative new universe that combines the enthralling world of Mexican wrestling and the heroic history of DC Comics: DC ¡LUCHA EXPLOSIVA!

This all-new line of 7″ action figures take its roots from the deep history of Lucha Libre and Mexican luchadores. Each figure is a Latin American-inspired reimagining of a classic DC hero or villain, complete with an all-new backstory drawn from Mexico’s rich cultural history.

With six figures set for release in 2019 and more coming in the years following, fans will be able to create epic storylines of betrayal and redemption, alliances made and broken and emerging heroes and villains. Which figure will you choose to be the campeón?- DC

DC Engines of Chaos is a line of highly detailed 7” statues, set in a gritty and dystopian Gotham City. Designed by Riley Rossmo, each statue tells a specific story and are all on unique environmental bases. The first character to be featured is Batman coming out in October, 2019. The statue shows Batman fighting off Joker-bots as he speeds through the desert.

Poison Ivy is the second in the line and hits stores February, 2020. The statue features the villainess atop her scooter as the only source of greenery in a barren and destroyed Gotham. The statue really shows off Rossmo’s detailed design with pumpkins, creatures and plant details. -DC

After Ra’s al Ghul succeeds in destroying society as we know it, a postapocalyptic world of motor vehicles and mayhem emerges. Heroes and villains cruise a barren wasteland on distinctly individualized bikes and vehicles as they fight for control in this new world. Based on the designs of renowned artist Riley Rossmo, each statue is a high-RPM reimagining of a beloved DC character uniquely optimized for this world; some figures have adapted to battle, others to survival.

If you think the end of the world is enough to stop Batman…you don’t know the Dark Knight. Riding atop a custom bike complete with armored wheels and a bat-shaped grill, it’s clear Batman isn’t going to let a little apocalypse (or Joker bots) keep him from delivering justice. The statue is cast in polyresin, which allows for delightful details—like sand being kicked up from the force of the bike—to come through on the home product. Gasoline not included. 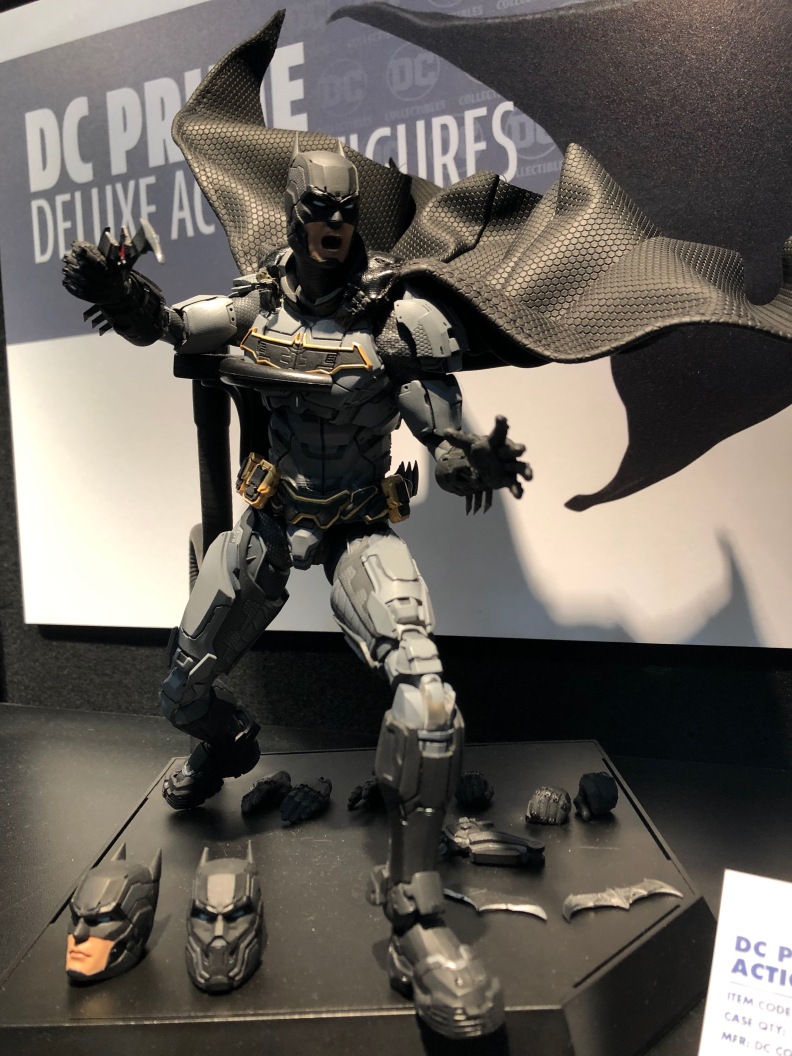 Good. Better. Best. DC Prime. From the team at DC Collectibles comes THE premium-grade action figure line for DC characters. These nine-inch highly poseable collectibles come with multiple pairs of hands and accessories, so fans can create their own ultimate renditions of their favorite characters. To help bring these figures to life, the team at DC Collectibles brought on concept designer Riccardo Federici, as well as sculptor and figure designer Wonil Song, to breathe life into these extraordinary action figures.

DC Prime is a best-in-class action figure line designed to be the centerpiece of any collection, direct from the source.

For the first release from the DC Prime line, the team could think of no better hero than the Dark Knight himself—Batman. This massive collectible was carefully designed to be the ultimate Batman action figure. With over 23 different points of articulation, multiple pairs of hands, a wired fabric cape and three unique heads, there are thousands of unique Dark Knight moments just waiting to be created. For those fans looking for the best-in-class Batman collectibles—your action figure has arrived. 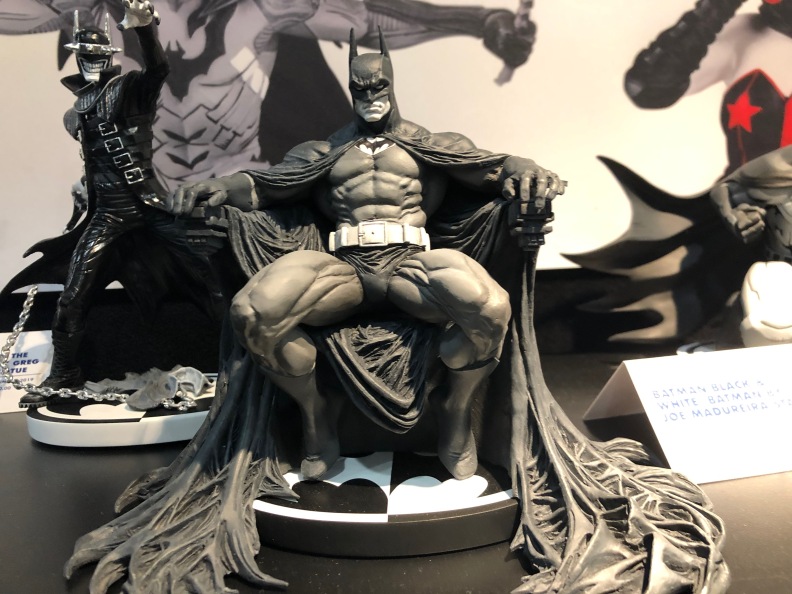 Ripped from the pages of DARK NIGHTS: METAL comes the Batman Who Laughs, a striking version of the Caped Crusader who makes nightmares shudder.

DC Collectibles’ longest-running line, the BATMAN BLACK & WHITE statue series has captured the hearts of collectors and comic-fans alike with its interpretations of the World’s Greatest Detective and select Gotham City characters from the industry’s brightest stars.

Starting in 2019, DC Collectibles is creating an all-new offshoot of the beloved black-and-white collectibles, this time in 3.75″ tall PVC figures. Released in sets of seven, including resized rereleases All figures are Batman unless otherwise noted:

never before available in stores.

Based on artwork created by Greg Horn

Straight from the variant cover of JUSTICE LEAGUE: REBIRTH #1 comes Batman by Joe Madureira, in a powerful stance, ready for action

Based on art by Marc Silvestri

Based on the art of Frank Miller

Following the success of the Teen Titans multi-part statue, DC Collectibles is back with a new line of combinable statues, this time featuring the Bat-Family! This new set features five statues that can be posed individually or combined into a massive showpiece. 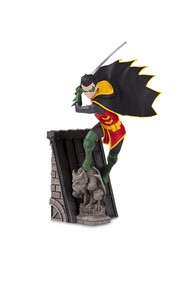 Designed and crafted to the highest standards of quality, the DC Gallery collection reproduces some of the most iconic props and collectible art from the DC Universe for display in homes and offices.

In her role as a champion of truth and justice, Wonder Woman uses a diverse arsenal of tools for both offense and defense. This massive, expertly crafted shield falls into the latter category. Adorned with numerous details from the rich history of the character, this piece will amaze Wonder Woman fans of any generation. The shield measures 22 inches in diameter and is crafted from fiberglass and polyresin. 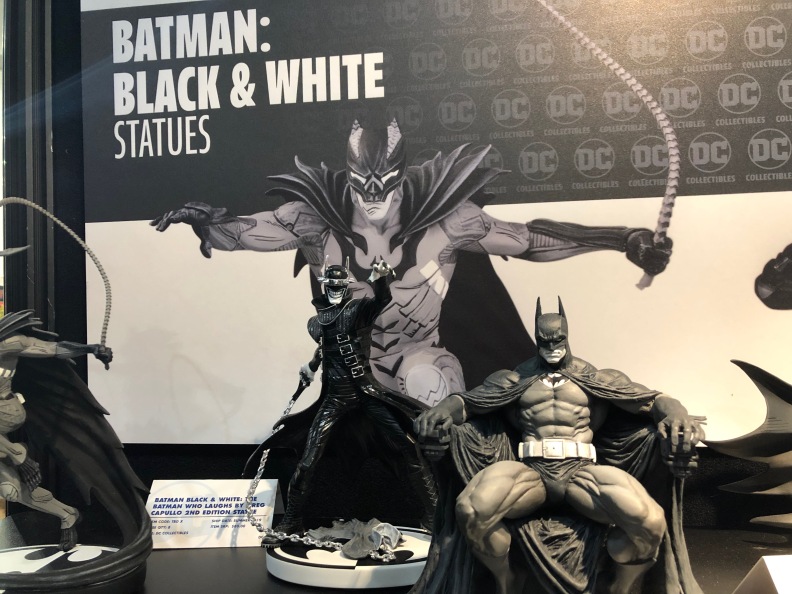