To Kill or not to kill? That is the internal moral dilemma that many superheroes face when it comes to defining their own core values, limits and boundaries. When is it okay to cross the super thin line between right and wrong when fighting for justice? What sets them apart from the very villains and criminals that they fight on a daily basis? When discussing the no-kill rule, one of the first heroes to come to mind is typically Batman.
When people think of our beloved Caped Crusader they initially wonder why he doesn’t just kill the Joker, or kill anyone at all for that matter. People automatically assume Bruce Wayne’s moral code is not to kill, but that has not always been the case. There have actually been many instances where Batman broke this very rule.

“But Batman doesn’t kill people.”
The Dark Knight has a long history of killing with an extensive body count. Movie goers lost it when Batfleck went on a shooting spree in Snyders’ Batman V Superman but the Caped Crusader has killed before, and yes using guns!!!

Batman enthusiasts would argue and point out that Batman in fact started out with a gun. He regularly killed both criminals and supernatural beings brutally: shooting them, strangling them, breaking necks, knocking them off rooftops etc. Eventually DC Comics would rid Batman of his murderous image, toning down his vigilantism and implementing his no-kill rule. When you think about it the Dark Knight has actually killed in many iterations of the DC Movie-verse. From Keatons throwing a henchmen off a bell- tower, letting the joker fall to his death, burning a man with the Batmobile and strapping a bomb to a man, to Bale blowing up the league of Shadows and allowing Ra’s al Ghul to die, to Afflecks controversial bloody ware-house shootout. But today I want to focus on Batman kills throughout comic book history.

Here are 10 Times Batman has killed:

1. The Bat- Man punches a man into a tank of acid

Batman has killed since his very first appearance in 1939 in Detective Comics #27 (at the time known as The Bat – Man), the masked hero punches a crook so hard through a railing, letting him fall into a tank of acid, saying “A fitting end for his kind.” Sounds like no remorse to me.

In Detective Comics #28, after obtaining information about large scale jewel robberies by impersonating Commissioner Gordon, the Bat-Man kicks one of the thieves off a roof to his death. No respawning here.

3. Batman sets a man on fire

The first Batman supervillain, Doctor Death made his first appearance in Detective Comics #29. In an attempt to extort money from Gotham the mad scientist created a lethal toxin. After a brief chase with Batman in his laboratory Doctor Death grabs his chemicals to toss at Batman. After a quick reaction Batman grabs and tosses a fire extinguisher causing the madman’s chemicals to hit the floor igniting the entire laboratory in flames. Batman lets him burn to death or so he thought. Doctor Death makes a surprise comeback in issue #30 which brings me to number 4.

4. The Batman: “The Return of Doctor Death 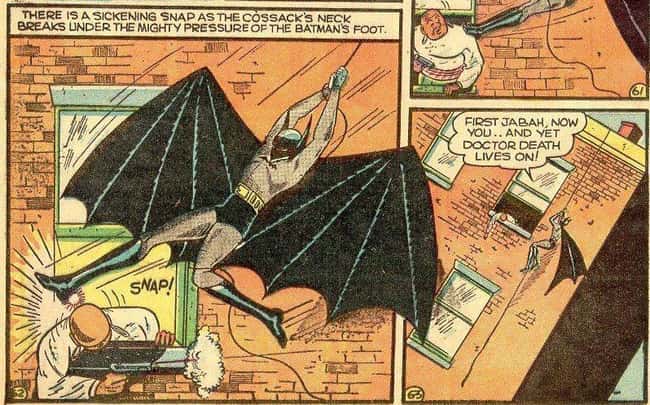 Batman is fighting Doctor Death’s second henchman Mikhail. When he pulls out a gun Batman jumps out the window. Then catching Mikhail by surprise Batman swings back delivering a lethal kick to the neck. Fatality much!

5. Batman shoots a machine gun into a truck, killing everyone/ dangles body from Batplane

In 1940 Batmans’ self titled- series Vol. 1 Dr. Hugo Strange (also appearing in Detective Comics) returns with a special growth serum, turning asylum patients into full fledged menacing giant monsters. Batman using his Batplane and machine gun wastes no time shredding through Strange’s henchman and monsters. He then captures one of the remaining monsters and hangs him from the Batplane with a rope around his neck. You know just flying around the Batplane with a dangling corpse. He later kills the last monster atop a skyscraper throwing tear gas pellets causing him to fall and well splat.

6. Batman impales a guy with a sword

In Batman: “The Screaming House” Detective comics #37 Batman fights his first spy. After Batman hears screams coming from an abandoned warehouse he follows a lead to a gang of foreign spies that are looking to destroy an incoming ship. After defeating the thugs and preventing them from destroying the ship Batman encounters the leader
of the gang. After a sword- fight battle royale the criminal ends up fatally impaled with his own sword.
And that was just some examples from the Golden Age!! (In the 80s we see a resurgence of a more ruthless Batman)

“The first whose flesh is touched by the spotlight shall die, Detective… for we cannot continue to exist in the same world. Do you not agree?” — Ra’s al Ghul
In 1982’s Batman Annual #8 “The Messiah of the Crimson Sun” written by Mike W. Barr with pencils by Trevor Von Eeden, we see Batman face a masked terrorist who later is revealed as Ra’s al Ghul. The Messiah, using the sun as his new source of power produces a special red sunlight wiping out an entire town to charred skeletons, targeting Gotham next. In this adventure Batman teams up with Talia to stop the leader of the League of Assassins from destroying everyone. We all know that Ra’s always comes back, but this time Bruce wanted a more permanent solution. Batman kills Ra’s by forcing his spaceship into a laser beam, decimating him and ejecting his ashes into space. No Lazarus pit this time buddy.

8. Batman kills his archnemesis in The Killing Joke

Another time Batman goes against his personal code of honor, is in one of the most iconic and well-known Batman stories: The Killing Joke. Released in 1988, written by Alan Moore with art by Brian Bolland, we see Batman put an end to the madness as he comes face to face with his arch nemesis, the Joker. After Joker’s brutal attack on Barbara and kidnapping of Gordon amongst other sick things, Batman subdues him at the amusement park’s funhouse. Gordon, still with his humanity intact, insists that Batman capture the Joker “by the book” in order to “show him that our way works.” In one of the most iconic scenes we never actually see Batman physically kill Joker. Instead the climax is purposely ambiguous as Batman is choking the Joker and the hysterical laughing across panels stops abruptly, leaving the reader to assume the Bat has finally killed his greatest adversary.

Batman battles it out with the greatest vampire in the Elseworlds series Batman & Dracula: Red Rain, part of the vampire trilogy by Doug Moench and Kelley Jones. In this gothic supernatural tale vampires are terrorizing Gotham and we see how Batman himself could become a monster. Batman destroys Dracula’s minions after luring them to the Batcave and detonating explosives exposing them to sunlight. Getting bitten in the process Bruce gains vampire abilities. Eventually growing strong enough to defeat Dracula he impales him, but it is too late as Dracula has already drained him of all of his blood, turning Bruce into a full-blown vampire. In this violent and dark one-shot Vampire Batman preys on criminals in Gotham and is an unhinged cynical version of the Dark Knight. And to top it off later Batman feeds on his own rogues gallery!

10. The time Batman burned criminals to death and then had sex

One of the more brutal modern examples of a ruthless Batman is 2005’s All Star Batman and Robin, the Boy Wonder. Readers could say this one took a literally opposite take on the whole no-kill ethics as Batman burned a group of criminals to death. Frank Miller returned to Batman and took a lot of criticism for his handling of this series, not only did Batman kill but he seemed to enjoy it. When a group of criminals tried to steal a bleach shipment, Bruce decided to literally light them up with a Molotov and then proceeded to have sex with Black Canary a few feet away from the burning bodies. What a romantic evening.

To kill or not to kill?
The modern-age Batman has a more strict “no-killing” rule. In more recent iterations of the Bat we see Bruce train exclusively to know his limits. He may beat perps to a pulp but he usually leaves them incapacitated for the GCPD to handle, leaving them with
broken bones not broken necks. Over the last 80 years we have seen so many different creators take on the caped crusader offering their own mindset and views on Batman’s ethics. The. No-kill rule has definitely become more ingrained in Batman culture as there are more stories featuring a Batman with limits. What are your thoughts on a murderous and gun-wielding Batman??
By: Nadya Martinez (courtesy of DC comics)