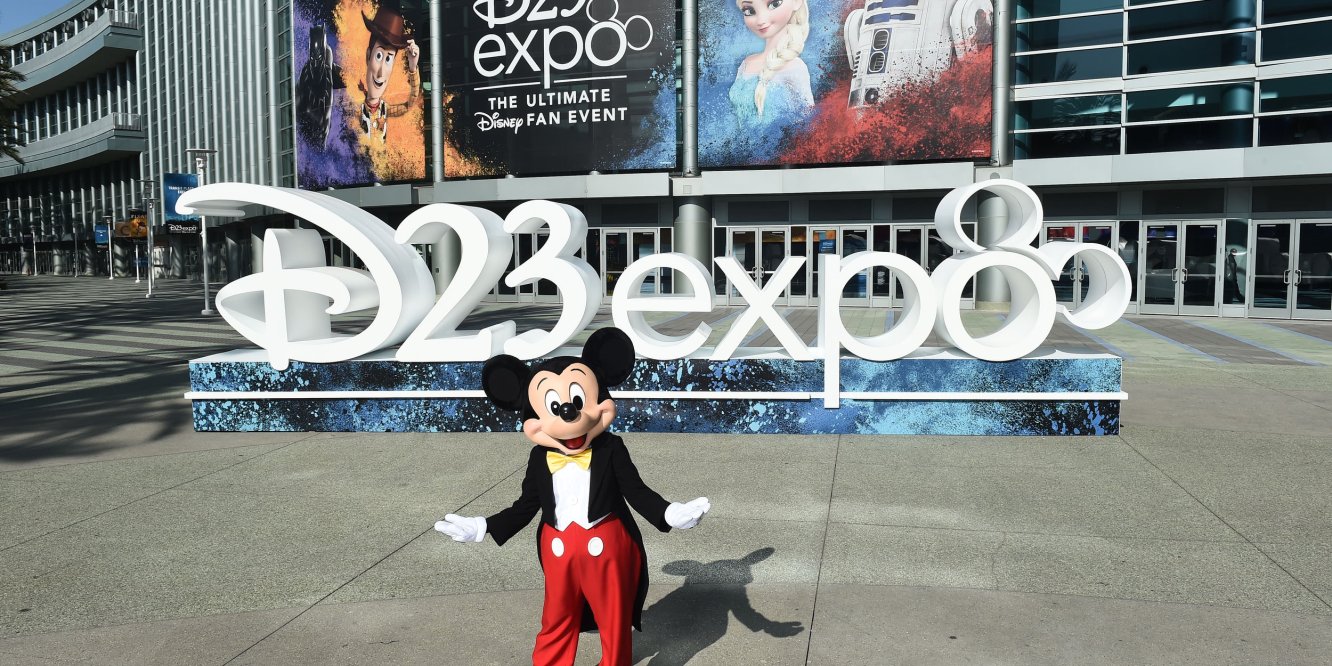 D23 Expo: Billed as the greatest gathering of all things Disney in one place,
D23 Expo is “The Ultimate Disney Fan Event.”

The largest Disney fan event in the world, D23 Expo Presented by Visa celebrates the wonderful worlds of The Walt Disney Company, including Disney, Marvel, Pixar, and Star Wars across film, television, theme parks, and more! This weekend marks the seventh D23 Expo! Guests are arriving from all 50 states and 43 countries. Throughout the Ultimate Disney Fan Event, more than 500 performers and presenters will take to the stage during can’t-miss panels and presentations.

More than 165 presentations, panels, concerts, demonstrations, meet-and-greets, and sneak peeks will take place during the Expo. Disney fans at home can enjoy more than26 hours of livestream content from D23 Expo [LIVE], including more than 10hours of exclusive [LIVE] Stage programming and 16 hours of other major presentations from the event.

There are 37 vendors in the D23 Expo Emporium, from fine art dealers and toy makers to travel agencies and Disney fan sites. This is the first D23 Expo at which select products will debut simultaneously within the D23 Expo Marketplace and shopDisney online, so all Disney fans can join in the shopping fun! More than70 stars from all the worlds of Disney will be making appearances at D23 Expo 2022, including new and fan-favorite shows and films such asThe Proud Family: Louder and Prouder,Grey’s Anatomy, Disenchanted, Frozen, black-ish, Home Economics, Raven’s Home, Cesar Millan: Better Human, Better Dog, The Santa Clauses, Bob’s Burgers, and more

The schedule for the main stages can be found here D23Expo.com. For the most up-to-date information, please download the D23 Expo app, available for iOS and Android devices.

Disney fans around the world can livestream the magic of D23 Expo 2022, including the Disney Legends Awards Ceremony and panels from Disney Parks, Experiences and Products; Disney Branded Television; National Geographic; and much more

Highlights of the D23 Expo [LIVE] schedule are as follows (all times are PT):

3:45 p.m. – Explore the World with the Next Generation of National Geographic!

Schedule and talent are subject to change.

D23 Expo is sold out. For more information, visit D23Expo.com.

About D23 Expo 2022
D23 Expo—The Ultimate Disney Fan Event—brings together all the worlds of Disney under one roof for three packed days of presentations, pavilions, experiences, concerts, sneak peeks, shopping, and more. The event provides fans with unprecedented access to Disney films, streaming, television, games, theme parks, and celebrities. For the latest D23 Expo 2022 news, visit D23Expo.com. Presentations, talent, and schedule subject to change. To join the D23 Expo conversation, be sure to follow DisneyD23 on Twitter, Facebook, Instagram, and YouTube, and use the hashtag #D23Expo.

About D23
The name “D23” pays homage to the exciting journey that began in 1923 when Walt Disney opened his first studio in Hollywood. D23 is the first official club for fans in Disney’s 99-year history. It gives its members a greater connection to the entire world of Disney by placing them in the middle of the magic through its quarterly publication, Disney twenty-three; a rich website at D23.com, with members-only content; member-exclusive discounts; and special events for D23 Members throughout the year.