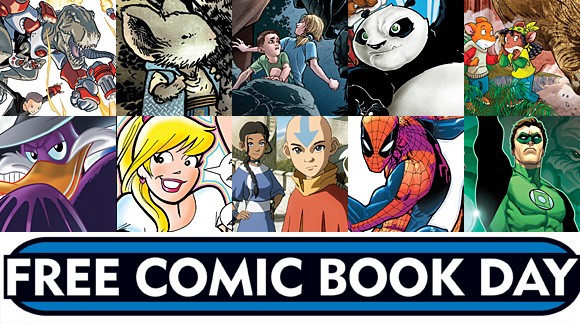 This annual event started 16 years ago, with participating Comic book shops around the world giving away FREE comics. All you have to do is show up! The event is held the first Saturday in May, just look up your local participating comic book shop. Free comic book day offers something for everyone (children and adults), and is a great opportunity to pick up something new.

Just make sure to check the RATING level!!

Here are some Spoiler free reviews of Select books releasing tomorrow!
Because of my love of adult themed cartoons I decided to choose Skottie Young’s I Hate Image, and the new Rick and Morty comic!

I’m already a huge fan of Skottie Young, and his hilarious yet dark fantasy series I Hate Fairyland.

For those not familiar with Young’s I Hate Fairyland check out:

“MADLY EVER AFTER” WHY YOU WILL LOVE I HATE FAIRYLAND

In this special issue we follow Gertrude on her quest to the land of IMAGE. After being stuck in Fairyland for almost 30 years, Gert may have found a secret passage home. This hilarious, fun-filled blood bath is full of cameos and inside jokes that both Image fans and comic readers will enjoy.

Along this bloody epic journey we encounter characters from Saga, The Walking Dead, Spawn and more! Don’t let the cute characters and pretty bright technicolor rainbows fool you. Gert kicks some ass. This extremely vulgar and violent fairytale is not intended for children!!!

Full of blood and gore, bunnies, and rainbows, fans of Fairyland and new readers alike will enjoy this book. Weapons Violence and Mayhem!!

“Bottom line, if you love the show, you’ll love the comic.” -Newsarama

And I completely agree!

As I was the reading the comic to myself I heard the tv characters voices. It feels just like the cartoon! The writing and art are very well done, Issue 1 already has me sold.

If you’re a fan of the television show Rick and Morty then you already know what you’re in for.

This series is full of Ricks smart ass jokes, and hilarious sayings.

It all starts when Jerry asks Morty to get a job, and of course Rick has some crazy insane ideas of his own. He convinces Morty to join in on his genius scheme and everything goes crazy!

Follow this New Adventure with Rick and Morty, and make sure to pick up your free copy which includes the story that started it all: Part One of “The Wubba Lubba Dub Dub of Wall Street.” Plus, an exclusive first look at the upcoming miniseries “Pocket Like You Stole It” at your local participating comic book shop!

Check out the full listing of books here: