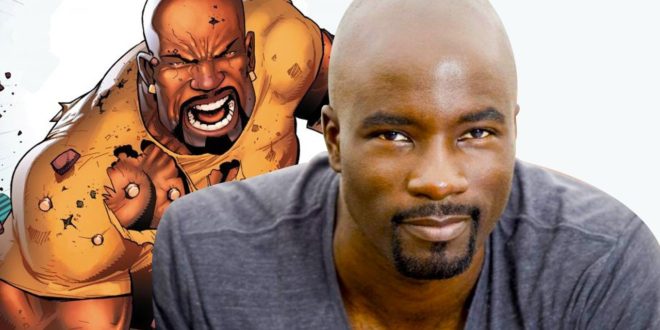 This write up will be brief and spoiler free…and have the added bonus of Douggary  Grant joining me to give his thoughts on the beginning of the series.

Douggary: Right off the bat I love the soundtrack, Adrian Younge and Shaneed Muhammad did a great job of crafting music that really set the tone of dichotomy for the whole show…gritty and refined.  The theme is awesome and captured the 70s era that the Luke Cage comics were created in, without making it sound dated.  I loved Raphael Saadiq’s “Good Man” performance at Cottonmouth’s club, can’t wait to get the soundtrack once they release the whole thing.

Luke Cage starts out slow, but builds a lot quicker than Jessica Jones or Daredevil did in the beginning.  Marvel and Netflix are doing a great job of meshing these series together, without having them seem like rehashes of each other.  As much as I loved Star Trek the Next Generation, all the Berman shows felt too similar and therefore like retreads.  Even though these shows are a bit darker than the Marvel movies, you can see how the Netflix series will combine well with the

established movie universe when it gets to be that time.

Mike Coulter is indeed Luke Cage, this part was highly sought after once it was announced Marvel was developing the series.  Terry Crews, Morris Chestnut, and many others were interested in playing the Hero for Hire.  After seeing Mr. Coulter in Jessica Jones I had no doubt they made the right choice.  Simone Missick KILLS it as Misty Knight, I can’t wait to see this woman take that character to the next level.   Mahershala Ali as Cottonmouth is a personal favorite of mine, I loved him as Remy Danton on House of Cards.  I have not finished the series yet, I’m taking my time to enjoy it.  I’m dying to see these heroes together, The Defenders can’t get here soon enough!

My initial impression of Luke Cage was that this is going to be a bad-ass series! Already a fan of Netflix Marvel series (Jessica Jones and Daredevil) I had high hopes for Luke Cage. The tone itself is very different from the other two series, and it works! I love that they don’t dwell on Luke and Jessica’s relationship, and that Cage has its own life form without feeling like a spin off. The opening credits and soundtrack go hand in hand with the tone of the series.

I love the real New York vibes that this series gives off, with the sense of community and love for local businesses like Pops Barbershop. Harlem is not just a neighborhood, it has a rich cultural history full of art and music embedded in its roots which this series portrays very well.

Establishing himself as “The King of Harlem”, Cottonmouth is a villain I sure love to hate! I think Mahershala Ali plays this role to the “T”. He embodies the off the wall loose canon, yet smooth and collected businessman. I love the spontaneity of this character, you don’t know what he’ll do next.

Everyone delivers, truly great casting. Simone Missick is the perfect Misty Knight, she is fun, tough, and a bad-ass detective, also super excited to see what else she will bring to the character.

I honestly can’t imagine anyone else playing Luke. Mike Coulter was already great in Jessica Jones, after his performance I knew he would be able to carry his own series. I like the subtle Jessica Jones “rebound” comment. I also love the cameos, connections, and brief comments connecting other Marvel entities, without being so blatant. The series lets us learn more about Luke’s past, his relationship with Reva and how he attains his powers. Also love the funny homage to the original costume!

I totally agree with Douggary in that I’m SUPER excited for what’s next: Iron Fist and the Defenders!!!