Courtesy of Lockett Down Productions

Courtesy of Lockett Down Productions

In honor of Black History Month

5 New Superheroes That Everyone Should Know!

One of my favorite new series right now features a fresh new character to the Marvel roster.

That is until a freaky inhuman attack involving  T-Clouds (Terrigen Mist)  absorbs Morris’ body transforming him into a ghostly figure with inhuman abilities. After this incident everyone assumes that Morris is dead, unknowingly that he jumped into someone else’s body!

Morris’ inhuman transformation has the ability to attach to “Host.” He jumps from body to body assuming full control of the body and minds of his inhabitants! Hence, the title “MOSAIC”

“It’s not everyday that Marvel publishes a book starring an all-new character with an all-new name, so the privilege isn’t lost on us. Morris Sackett is a special and unique character but is still so very…Marvel.” -Nick Lowe Executive Editor (Say Your Piece)

Marvel’s new hit Mosaic, written by Geoffrey Thorne with pencils by Khary Randolph; released its first issue this past October.

we see some familiar faces as Morris has his first

*Check out my interview with Mosaic Artist, Khary Randolph here:

Okemus is the first title to come from independent publisher R.A.E comics owner/creator, Taylor J. Sterling. Selling out both his first issue Zero at SDCC 15, as well as the debut of issue 1 at SDCC 16.  Red Arcis Entertainment is centered on creating groundbreaking characters that are unique, diverse and interesting.

On this post-apocalyptic journey of a time-traveling, shape-shifting superhero we delve into the world of Okemus. [full interview here]

“WHAT IS OUR PURPOSE..OUR DESTINY? IS IT PREDETERMINED?

“In the far distant future, the planet earth has become a desolate shell of it’s former decadence. Once great nations now lay in ruin. Monstrous subhuman creatures called Mechai roam the Earth terrorizing, feeding, and killing any living thing in their path. With each day the human populous dwindles.

Enter Cale….a time traveling warrior whose body is inhabited by a symbiotic creature, that at a moments notice can transform him into a super-powered fighting machine.” -RAE

On a quest to find the truth about where he came from and how he gets his powers.

We can expect to see Issue 2 release this summer at SDCC 17!!

Get your copies from RAE HERE:

*Check out my interview with the creator of Okemus here:

WHAT IF ONLY BLACK PEOPLE

Black is a new Sci fi action adventure comic book series that touches upon some of the major social issues that America is currently facing in the African American community, such as “Race, inequality, and disconnection from the police and citizens.”

Creator, writer Kwanza Osajyefo and artist Tim Smith 3, team up along with Jamal Igle, Khary Randolph and Sarah Litt to bring us the new groundbreaking graphic novel, BLACK. Published by Black Mask Studio, Issue 1 was released in October 2016. I’ve been hooked since I picked up both issue 1 variant covers at this past NYCC. I first heard about it through the team’s Kickstarter. Currently up to issue 4, BLACK keeps its readers on their toes. I got the chance to speak with Kwanza and Tim about BLACK, assembling a team, social injustice, and the Black Lives Matter movement. [full interview here]

Kareem Jenkins is a 15 year old typical inner city kid that gets racially profiled and gunned down by the police. He soon discovers that he has a gift, powers which are only manifesting in black people!

Journey with Kareem on his quest to find the truth, as he learns more about his abilities and controlling his powers.

Black will consist of 6 issues.

Catch up now on Comixology, the Black Mask official store or get your copies at your local comic book shop.

*You can check out my interview with the team behind Black here:

Just reading the first two lines “That Bitch… She has my baby.”

“When I find..her..this storm..flurries..compared to what I plan to do” had me curious and wanting to read more.

The Artwork also drew me in right away. The painterly use of color, kind of reminds me of airbrush like a style I find similar to IDW ‘30 days of night’.

The protagonist Chenoa D’Ken, also known as ‘ICE WITCH’ is on a mission in search of her missing daughter and nothing will stand in her way.

The series starts off with an epic fight scene in her battle with the Gatekeeper of Bu’Toh. Here we see some serious ass kicking, and get our first glimpse of Chenoa’s powers and abilities. Although Chenoa has super strength we also learn that she has a vulnerable side. I don’t want to reveal too much so you’ll have to check out Issue #1 to learn more about this kick-ass female hero!

Chenoa D’Ken was born to kill. As matriarch of the intergalactic assassination faction under the umbrella organization R.A.I.D.E.R.S , the mere whisper of her code name ‘Ice Witch’ instilled fear in the most hardened of criminals. But after finding an existence outside of contract killing; choosing to get married and start a family, Chenoa’s life began to take a drastic turn….for the better. Until it was all ripped away by the same people she had been the most loyal to. With her husband murdered and huge bounty on her head there isn’t anywhere left for Chenoa and her infant daughter Mae to go…except to her former enemy the governing entity; the Intergalactic Confederated Alliance, accepting clemency for her crimes and their protection from her former employers….but at what price? -Lockett Down Productions

Purchase issue #1 on Lockett Down HERE:

The story starts off in 1900, in the Sahara desert.

In a world where “human and preternatural alike are all some variation of vampire” a group of women rescue young Evelyn from her burning island home, traveling deep into the desert.They must protect Evelyn, an eleven year old girl who happens to be the last of the “Purifiers” at all cost.

In this first issue we have a cool action scene in the desert, full of guts, gore and violence.

We learn that there is a battle between vampires and the last of the Purifiers. Evelyn’s guardians do all that they can to protect her including eating vampires after taking them down! EATING VAMPIRES 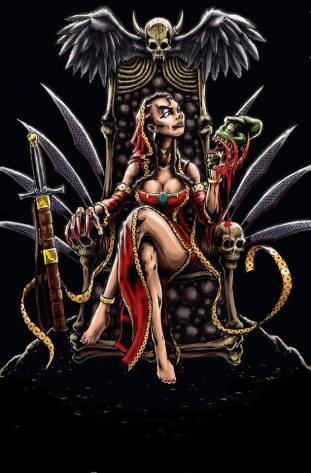 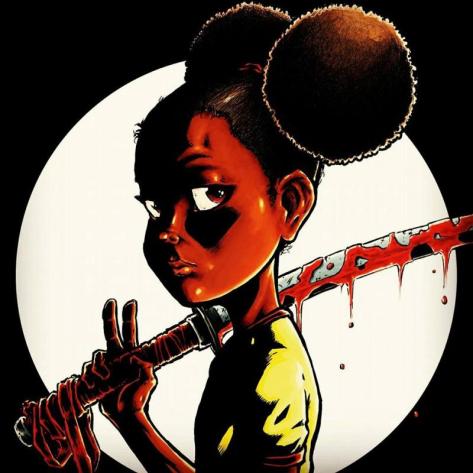 “Rigel Alexa is a Battle Guardian, one of the many protectors of the Sect of Purifiers. When the realm’s worst nightmare comes true and all that remains of their once powerful nation is an eleven year old girl named Evelyn; Rigel must find a way to keep her safe, even if it means traveling to the most dangerous of places. But with a mysterious band of mystical women at Rigel’s disposal, she will do whatever it is that is necessary to ensure that the Purifier line continues, even if it costs her the one thing she has always wanted; a cure.” -Lockett Down Productions